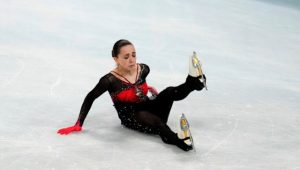 When Russian figure skater Kamila Valieva took the ice for her free skate were you holding your breath? rooting for her? booing her? Did you look away or leave the venue, as it’s reported the USA skating team did? Or did you stand agape like I did, watching a 15 year old child who bore the impossible weight of the sporting world on her shoulders, try to stand up under it. She had tested positive for a banned substance but because of her age had been allowed to skate anyway.

Citing the potential for “irreparable harm” if Valieva were prevented from skating, the IOC allowed her to skate while suspending medal ceremonies if she were to finish in the top 3. It’s the problem with bending the rules, while trying to be “nice” and give the benefit of the doubt, it nearly always flies in your face and comes back to bite you.

As it did when this teen, this prodigy, this brilliant ice skater — perhaps the best ever — began her skate and then uncharacteristically fell. And then fell again. Banned substances may help with your endurance and strength, but they won’t help you keep your balance. When Valieva fell, the whole skating world, the whole Olympic world, and perhaps the whole elite competitive world came tumbling to the ice with her.

She tested positive: she shouldn’t have been allowed to compete. Fair and clean competition demands this. But somehow, this teenager slipped through the cracks. She’s just a child, an innocent, a juvenile, perhaps give her another chance. That chance broke her and everyone in its wake.

But let’s take a moment here to think about the children in our care who are exceptional. Yes, those very ones who we see with endless potential. They’re gonna go far. The sky’s the limit. They’ve “got all the tools.” The future is nothing but bright. These are the sporting phenoms we spot at 6 years old, and now even younger, who have a natural swing, an uncanny knack, a uniquely deft touch on the ball. And … they are driven — by what we cannot exactly say, but they are so mentally tough they will not give up until they win it all.

To these and to their coaches and parents I ask, who is watching the children? Who among us is just letting them play? helping them learn? letting them make mistakes so they can see they can survive them? Who is diverting the pressure of competition in order to lighten their load? Who is allowing these children to grow up as children learning childhood things? Anyone?

In our USA world of sports — not just the Russian or Chinese versions — we are identifying children young, selecting those with the traits we know will play, honing skills with precision over hours and hours of training, and as a result they are often breaking. Injury is almost a right of passage — an expected outcome, a small hurdle, a mere obstacle to be forded along the way.

How about mental injury? If they’re not mentally tough enough, can’t cut it, we tell them to be on their way. We want the kids made of steel, inside and out. The ones nothing rattles. The ones who don’t break under pressure. The ones who push through, no matter what. Who play through pain… anguish… injury. Who dehydrate to make the weight class? Who starve themselves to be light enough to complete the flips and perform the tumbles. Or gobble the supplements and calories in unhealthy quantities in order to bulk up in order to prevent the pass rush from breaking through the line of scrimmage.

Every sport has its ideal body type. Now our technology can tell us exactly what that is.

Every sport has a prime mentality. Now our sport psych can train the brain to be just like that.

Is this really what we want for our children? To give up everything for a moment of Olympic glory? Or less… a college scholarship? a chance to make the team? a tryout with the “select” team?

Can we just pause in this sad moment for Kamila Valieva, and let it offer us some perspective? She has been sifted through thousands upon thousands of hopefuls to arrive at this very time to perform in such a way that she might win gold. And then, if successful, to retire to an ordinary life. Because this pursuit has taken all she has to give by the time she is 15 years old. Now?

I’d like to shake my finger at the adults who “handle” her, train her, coordinate her competitive routine; surely they should bear the burden of the events of this day. But it’s likely they will continue as they have been … finding the next Kamila, and then the next.

What about us? what about our children? what about our system that rewards risk taking, unnaturally lean musculature, exhaustive training and low, low body weight? especially in our female athletes who cannot otherwise jump so high, spin so fast, or land so cleanly?

… who is watching the children?

At least in the “kiss and cry” they give them stuffed animals.