↓
Home Menu ↓
Skip to primary content
Skip to secondary content
Home→Coaching→Just Don’t Get Hurt – How do you play that game?

When our daughter took the field with the high school soccer team, these words of advice were our best attempt at injury prevention. “Just don’t get hurt.” What a game plan, eh? How do you play the “just don’t get hurt” game? Here are some options:

None of these are very good options if we want to create effective competitors and winning teams. But as a parent of a kid who played beautiful club ball and was on several college coaches recruiting lists but who wanted to play for her high school, ‘just don’t get hurt’ was all we could muster. It was on my mind every time she took the field. But telling them what not to do just is NOT a good strategy.

They need a strategy.

As coaches we’re good at instructing and advising. We tell them how, show them, and explain. We coach the scrimmages making sure they know what to do in every situation. Then we let them loose with their game on, and they come back limping.

“What happened?” we ask, in as much vicarious pain as they are in real pain.

“I didn’t realize he, didn’t anticipate she …” they’ll start to say.

And that’s it. There’s a huge chasm between knowing and realizing. Knowing is something WE do with our minds. Realizing is something THEY do with their bodies. They have to take what they have heard and seen, work on it to make it what they know, and practice it so it becomes nearly second nature.

Then they have to put it into play. They “real-ize it.” And the field of play is the only place that can happen.

Because the game introduces the unpredictable opponent, the one who wants the ball as much as they do and may want the win even more. That’s the moment when our “Just don’t get hurt” advice rings completely useless. The athlete needs just to make it happen – all game long.

That’s active voice. Applied to what’s happening right now. Always a step behind a future event. And how in the world can you act on the future to make it “not happen?” In every strategy I know, simply addressing the issue makes it more likely, not less. How completely impotent does that make them?

Yet, ‘just don’t get hurt’ is doing just that. It’s nervous-parent talk, and it doesn’t give them a strategy.

On the other hand, there’s the warrior mentality, the “athletic arrogance” that RGIII has been accused of that’s been described in the warrior girls and memorialized in Michael Sokolove’s book of the same name. It’s the take-no-prisoners, lay-it-all-on-the-line approach today’s athletic champions are often congratulated for. That is, so long as they don’t get hurt. There’s that phrase again.

Much has been written about Griffin, the 22 year old phenom who talked his coach into letting him stay in the game. Of course he did. That’s what young people do – at least the kind that play like he does. They have no fear of injury; it can’t stop them. Nothing will…until it does. And then, they figure they’ll just re-calibrate.

This reminds me of a father-daughter pair I consulted with a few years back. I’ll call them Joe and Lisa. Lisa was a championship basketball and lacrosse player. Her Dad was her biggest fan. He went to all the games, filled in to coach at some of the practices, and brought her to be evaluated for injury risk. He was completely supportive but every ounce a medical professional and worried father.

I ran an injury prevention training session with this team which included a video assessment of each player. Then I invited players and parents over for a “viewing” and offered recommendations from the session. Joe and Lisa were the final pair to watch theirs.

Lisa was a natural athlete. She had an aggressive playing style and an unfortunate tendency to roll her knees inward when she jumped, landed and changed direction. These are all well known indicators of increased risk for ACL tear. Joe and Lisa watched the video and listened carefully to my recommendations. Joe was shaken and wondered whether Lisa should continue playing.

Lisa dismissed her dad at once. “Don’t worry. If I tear my ACL, I’ll just have it repaired.” This is where the young warrior athlete lives. Go for the glory. If something breaks, fix it.

Where is the parent? Often he’s thinking is this glory worth it? It’s not small matter, fixing a knee. Complicated surgery, months of rehab and no guarantees.

Doctors are Not Miracle Workers

This doctor Dad knew that repair does not make it good as new. Doctors are not in the miracle business. Oh, the surgeons think they’re pretty darn good. They’re confidence  is sky high. And it has to be, just like the athlete’s, because confidence is part of their game strategy. It inspires confidence in their patients.

This rubs off in turn on the rehab team: physical therapists, athletic trainers, and health and fitness professionals. We tell the athletes we believe they have what it takes to come back at 100% because that’s in our professional rule book. That kind of talk motivates them to work as hard as they can to get back to 100%.

But I’m with Dr. Joe. A thing repaired is never the same as God made it.

A highly motivated athlete will work hard in rehab and may emerge stronger and more balanced in their return to performance, but ‘if I tear it, we’ll just fix it’ just isn’t a good game strategy. And it’s a terrible life strategy.

Be Prepared but Be Smart

So what we have at the most competitive levels of play is a chasm between parents and caring coaches who want performance but not at the expense of caution and warrior athletes who pull out all the stops regardless of the risk.

Athletes with staying power who have sustained their high level of play over many seasons have constructed the sturdiest bridge over this chasm. One put it this way, “The harder you go into a tackle, the less likely you are to get injured.” 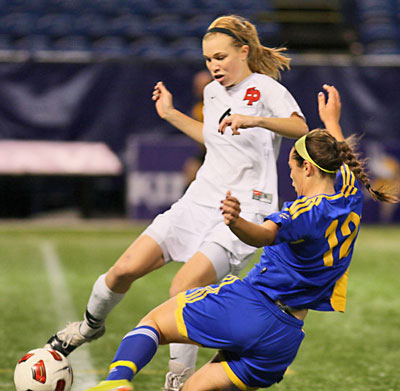 My daughter taught me that. Yes, the one who I was wringing my hands about. Good thing she wasn’t listening too hard to mom and dad. She had a real game plan. One that she could execute. It didn’t involve charging in like a locomotive that’s jumped the tracks. Rather, it required going in solid. Good mechanics. Good form. Proper execution. Playing what you’ve prepared, making every play a good one.

Yes, Some Will Still Get Hurt

Injuries will happen, despite our best efforts to prepare our athletes. When they do we need to gradually return them to play – both physically and mentally. We help them by re-introducing the skills, the challenges, the quickness, the demands, all while dangling in front of them that 100% performance target the surgeons toss off so blithely. Because they need to fight their way back.

The good news here is, the playing field has prepared them for this competition, too. But time is short. There is a relatively small window for their recovery and return before their losses become difficult to reverse.

If, upon their return, they discover they don’t quite have that move, or they’ve lost a split second, or their balance is just a bit off, they’ll adjust. When you’re young you can do that.